My goal for the two triathlons was to either place in my age group or have the best bike split.  I exceeded my expectations at the Dewey Beach Tri by coming in first place in my age group, 17th place overall, and the number one bike split — my personal best time for the bike course by about 30 seconds. I can honestly say this is my best-ever triathlon performance.

We arrived at the event bright and early.  I had trouble pumping up my rear disk wheel but one of my weekend housemates and a fellow competitor lent me a pump while her husband shone his iPhone flashlight on the operation in our pre-dawn preparations, and I was good to go.

I’ve been swimming often, doing lots of work with the pull-buoy and sets of hard 50 meters and 100 meters. The ocean was calm and I set a steady crawl pace, breathing every two and four strokes intermittently throughout the swim. For the first time in my tri career, I actually passed folks from the earlier wave starts.

I hustled to the transition area and managed to make it to my bike without hurting myself this year.  I hopped on the bike and wound it up.  There were zillions of folks out on the bike course and I had to repeatedly slow down to wait for them to pull over so that I could pass. (I must have said “on your left” 100 times.) The wind was not a factor on the bike course for the first time I can remember in this race.  On the return, there was one stretch where it was kind of neutral after the bridge and I was able to go fast.  I passed my buddy Al Ryder, another weekend housemate, just before the turn on the bike.  Al came in second in our age group last year and he was one of the four people who ran past me last year. 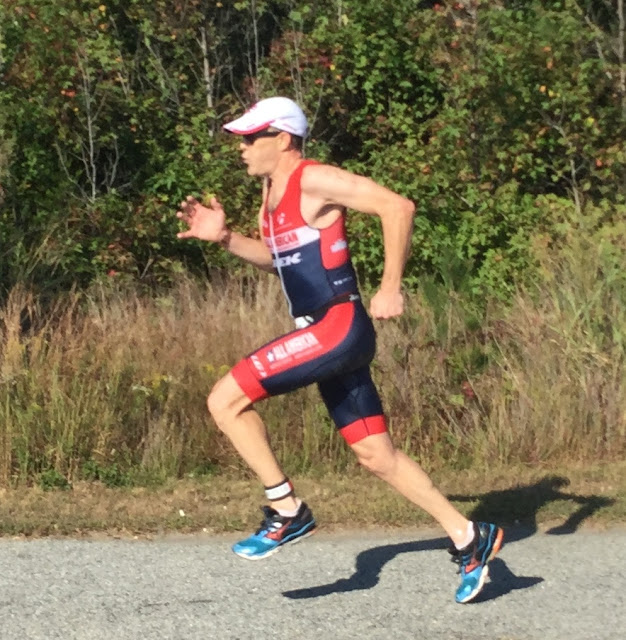 I was the first guy off the bike in my age group and had one of my best T2s ever in this race with a time of 1:09. For the entire run, I was thinking ‘I don’t want to be passed by four people in my age group again’, but for much of the first half, I had a cramp somewhere around my left lung.  I made it to the turn before people from my age group started to reel me in.

The first guy from my age group to pass me was John Babin of NY, NY.  He is very tall and just breezed by me.  I was at my limit and could do nothing but longingly watch as he got away. Then, as has happened almost every year I’ve done this race, Steve Koch of Shillington PA ran by me like I was standing still. Since he had the number 1 overall run, there is no shame in getting passed by Steve. I ran at my absolute limit and sprinted to the finish line. The best I could do was 3rd in my age group and I succeeded in keeping Al Ryder at bay.

Fortunately for Al and myself, the two guys from our age group who beat us, placed second and third for the overall masters class. Special kudos to the number 1 masters class finisher Kevin Owens, also a member of our house crew.  Kevin had a serious wreck around May this year, so the fact that he was able to train and compete and simply finish the race is, in itself, a tremendous accomplishment.

My other housemates, pretty much, ran the tables on the competition.  Mark Haynes, despite pulling his calf, came in third for his age group.  The ladies really shined.  Kari Stover, competing in her first ever triathlon, came in 1st place in the masters class.  Bridget Ryder came in 2nd place in the masters class.  Lisa Chulock had an outstanding bike split and Susanne Lowen finished strong despite minimal training.

My first time doing this event, I really didn’t know what to expect. The event consists of a 1,000 meter open ocean swim, an 18.5 mile bike and a 7,000 meter run (4.3 miles).  Four of us from our group doubled up and did Bethany Beach the day after doing Dewey Beach.

We arrived on time and racked our bikes in our the allotted parking spaces for each entrant.  The surf conditions were benign and I felt great on the swim. T1 was okay, but I had trouble getting my socks on.  The bike went well too.  After turning onto the course, the road opened up and I was able to drill it on the bike. With about four miles to go, my legs started to feel tired and I had to dial my efforts back a bit.

The run was not great.  My efforts from Saturday began to take their toll and the run was a matter of limiting losses and survival.  Just like yesterday, John Babin from NY, NY ran by me, although much earlier in the run.  I got passed by approximately 15 competitors, including a super fast 14-year-old boy and another guy in my age group.

Mercifully, the run ended and I managed to make third in my age group and 29th overall.

Additionally, I had the number two overall bike time with an average speed of 26.5 mph, not a slow pace, but the guy who beat me, crushed me convincingly by 1:55. This gentleman is named Matias Palavincio.  He was first overall by a margin of over 6:00.  He is, apparently, a force of nature and a pro level athlete.

Kudos to Susanne Lowen for doubling up and finishing strong in both events.  Kevin Owens, Mr. Consistent, place 8th overall and first in his age group. Kari Stoever, competing in her second ever triathlon after Dewey Beach the day before, placed first overall for the women, an extraordinary achievement!

Sadly, my Garmin refuses to disgorge the data, so there is no Stava segment at this time.